Why Tromsø is the Perfect Base to Explore the Arctic Circle

Just five hours from London by plane is Tromsø, an ideal base-camp for exploring the Arctic Circle.

Located in Northern Norway the small, green and clean city is very welcoming and very easy to get around.

Tromsø's architecture is a mix of new and old, but consideration has been made to retain a traditionally Scandinavian feel.

Amongst the key attractions is the futuristic triangular-shaped Arctic Cathedral which dates back to 1965. Hurtigruten offers a midnight service excursion exclusively for its guests - a great way to appreciate it by night. 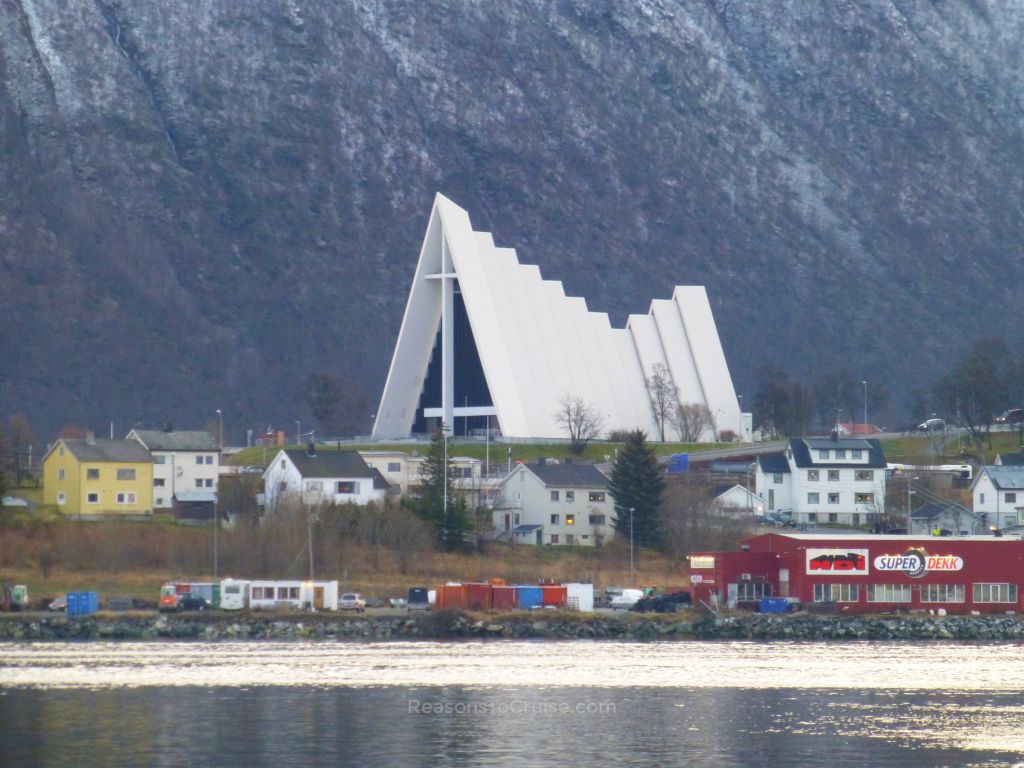 I found the library to be quite an impressive looking building. Architecturally, it stands out from its neighbours but somehow still manages to sit nicely amongst them.

The glass façade lets a lot of light into the building, an essential requirement in the short winter days. When I visited in November daylight was in short supply, with dusk falling at noon and complete darkness at around 3 pm.

New juxtaposes old throughout the city. This blend is perhaps most playfully demonstrated with the brown TotalEiendom log-effect cabin set against a grey apartment building. 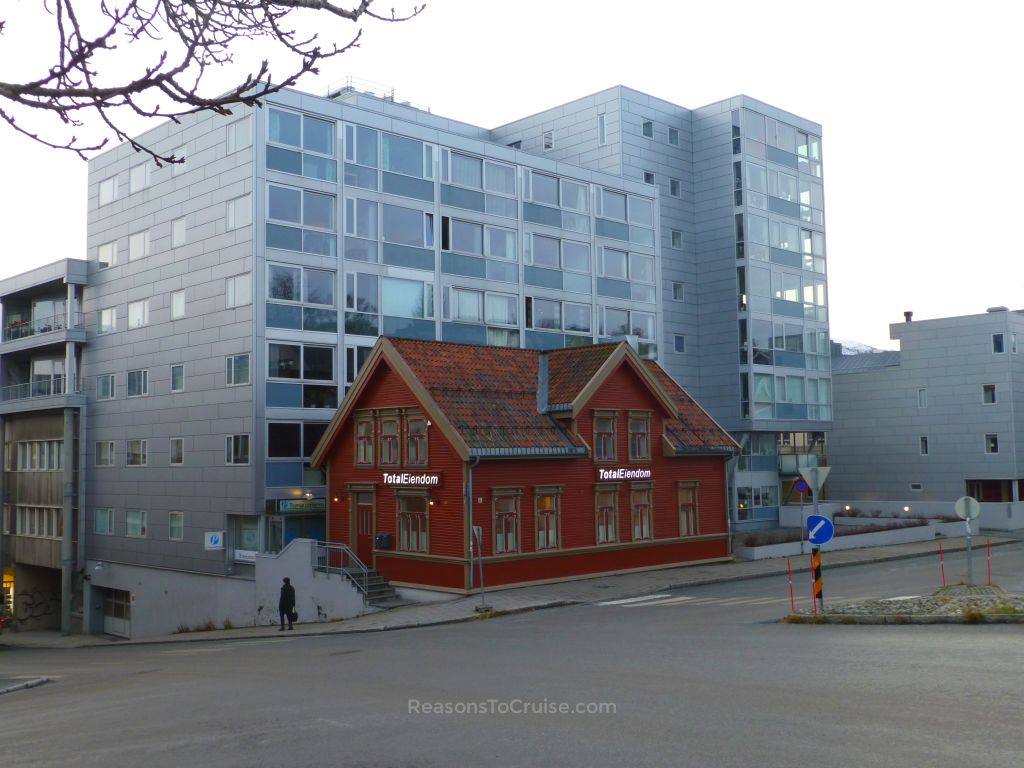 Little and large; old versus new (at least in appearance)

The city also boasts a couple of key civil engineering marvels. The Tromsø Bridge was the first cantilever bridge to be built in Norway and can be walked or driven across to reach the Arctic Cathedral.

For those fascinated by feats of engineering, the underground road network is a marvel. Road number 862 passes through a tunnel underneath the mountainous terrain. While that may not sound exciting, this tunnel is unique thanks to the inclusion of a series of roundabouts.

The entrances to some of Tromsø's tunnels can be tricky to spot. One opening appears to sit beneath a house!

Tromsø benefits from a good concentration of quality hotels with easy access to the city centre.

If you are flying to Tromsø, take the convenient Flybussen shuttle service which stops outside major hotels. In my case, it was just across the road. When I used the service an adult ticket cost NOK 80 (≈ £7) one-way or NOK 120 (≈ £10) return. Up to two children can travel free of charge when accompanied by one full paying adult.

I stayed at the Radisson Blu Tromsø hotel which is located directly opposite the quay used by Hurtigruten ships for their Coastal Voyages. The hotel was modern, clean and comfortable.

I stayed in a peculiar chilli pepper-themed room for one night before my Hurtigruten cruise and a more traditional room for the one night afterwards. Both were spacious and comfortable. The only real difference, beyond the décor and location of the rooms, were that the former had a bathtub in the bathroom while the latter had a massive walk-in shower.

Along with many hotels comes many restaurants. Norway is notoriously expensive, even compared to cities like London, so be prepared and take plenty of Norwegian Krone with you.

There are plenty of local food options available in bistros, gastropubs, bars, and simple restaurants.

Given the city's proximity to the water expect seafood to dominate on menus. King crab is a favourite as is Arctic Char (it tastes a bit like trout and salmon).

You will often find reindeer and other meats on the menus too, such as pork and beef.

If you are eating on a strict budget or fancy a taste of home, head to Burger King. Expect a standard menu with few regional twists.

Another option is 7-Eleven, an American chain offering takeaway pizza, sandwiches and pasta.

Happily, international brands are few and far between in this quaint and cosy city.

You will find far more small independent shops than international brands in Tromsø.

A Tromsø street with traditional buildings either side

The city boasts an indoor shopping centre, the Nerstranda Centre, but even this is full of small boutiques. A visit here is a must to take a respite from the bitter cold in winter.

One of the largest shops in Tromsø appeared to be a souvenir shop, selling all manner of Northern Lights and Tromsø-branded merchandise.

So you have arrived in Tromsø, dressed in several layers because it is nippy in November, but what should you do while you are there?

I arrived one day before my Hurtigruten sailing to Kirkenes. I can highly recommend a three-night cruise as an effortless way to traverse the Northern portion of the country.

I visited the Tourist Information office, located just behind the quay, and found it full of people planning Northern Lights excursions. During the winter months, there is a good chance of seeing the natural phenomenon, and there is no shortage of experts willing to take groups out to the middle of nowhere to get the best view of them.

Before I boarded my ship, I joined a Hurtigruten-arranged excursion to a husky dog farm - Tromsø Villmarkssenter - where they kept around 300 Alaskan Huskies. In the winter (when there's plenty of snow) the farm operates dog sledging tours.

During the summer (and moments when there is a lack of snow in winter) they offer tours of the farm, with a thorough explanation on how they raise the dogs. A short video presented by owner Tove Sørensen follows, explaining her role and the competitions she had entered, including The Iditarod in Alaska.

Tromsø also has its fair share of museums, but its natural beauty dominates the offerings, and understandably so.

Have you visited Tromsø? What did you get up to in the city? Let me know in the comments below.