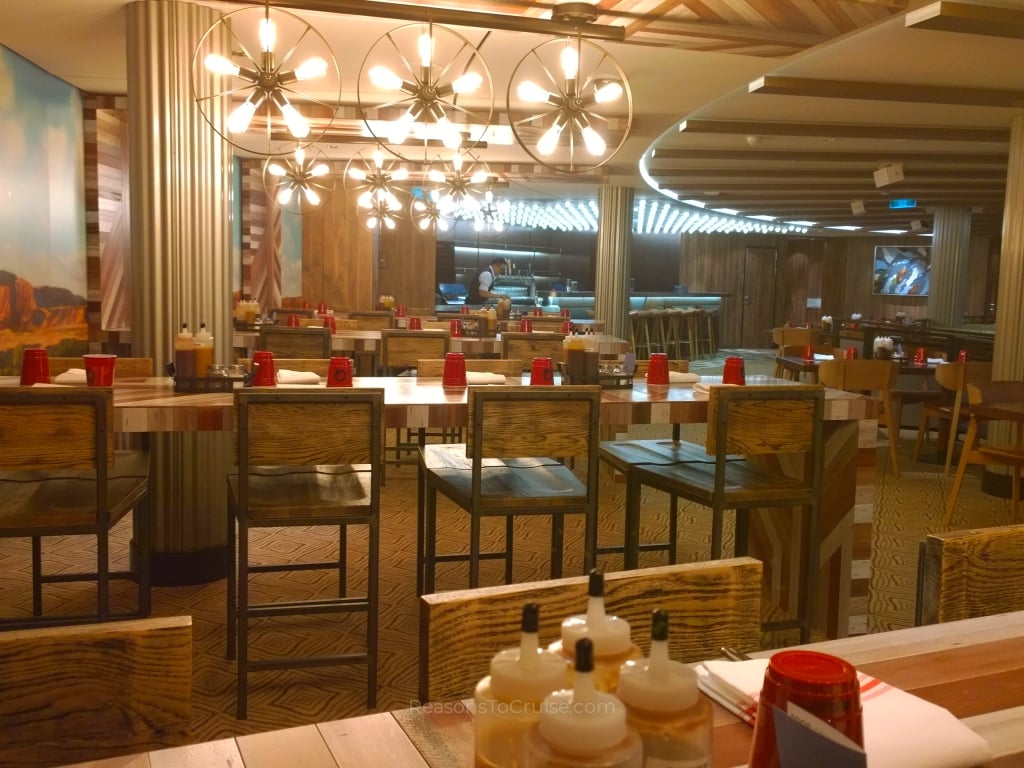 "Where would you like to dine?" asked a lady sitting meekly in the corner of a room, drowning in restaurant menus.

There was only one choice for me: Q Texas Smokehouse. A highly sought-after choice but I was an early bird and I caught the worm.

My meal at Cagney's Steakhouse was already arranged on my behalf, and I tried Food Republic previously on sister ship, Norwegian Escape.

I could have enjoyed a dinner-show at Teppanyaki with shrimp flying left, right, and centre. I could have travelled to Italy at La Cucina, France at Le Bistro, or Mexico at Los Lobos. I was curious to see whether Alaskan salmon featured on the menu at Ocean Blue. But I craved something American. Something southern. Something smokey.

Q Texas Smokehouse is certainly a hot venue. Reservations filled up in the blink of an eye during my two night mini cruise, and a veritable list of who's who chose to dine here.

The restaurant sits at the front of the ship on deck 6, neighbouring the lower portion of the Bliss Theatre. The venue is kidney-shaped, with all seating offering great views to the stage at the rear. 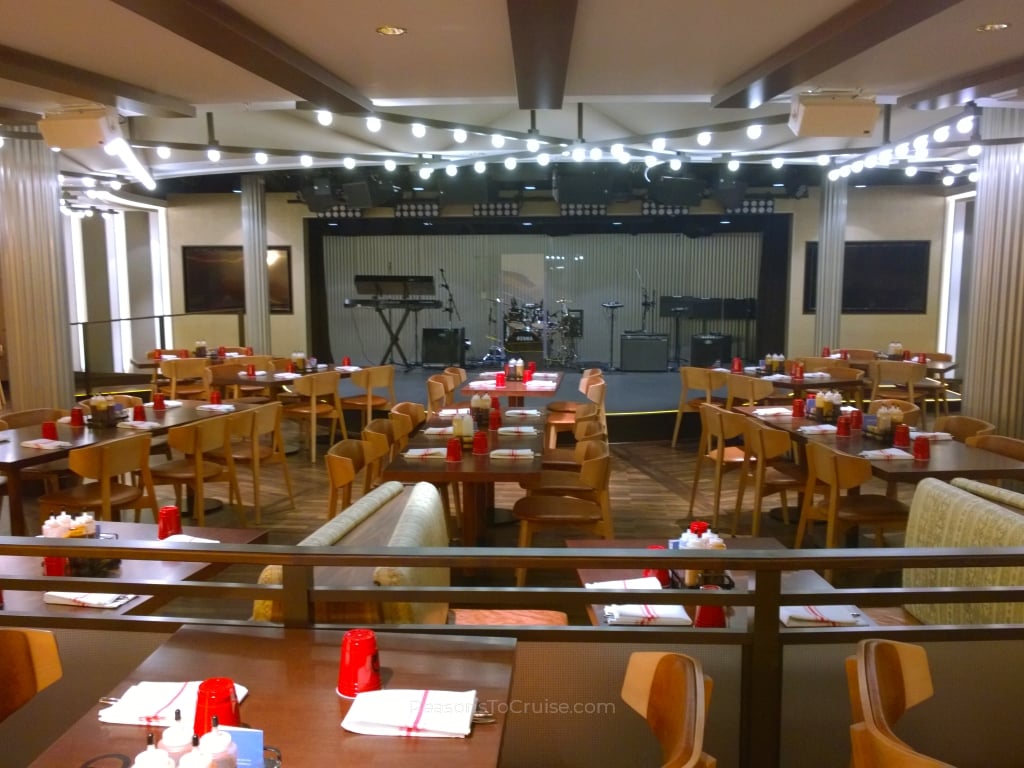 A variety of seating is available at traditional tables, benches, or the bar.

The décor cleverly instils a Texan feel, but it's the staff and food that help bring this restaurant alive.

Waitresses dressed in cowgirl garb - complete with western hats - ferried plates back and forth. It's not as tacky as it sounds - Norwegian treads the careful line between authentic and kitsch.

The menu has a variety of southern delicacies, with smoked meats big on the agenda (the clue really is in the restaurant name!).

To begin I could have chosen the tortilla soup, devilled eggs, fried green tomatoes, chilli and tortilla chips, Texan crab cakes, or fried okra. But the pulled pork loaded fries caught my eye. 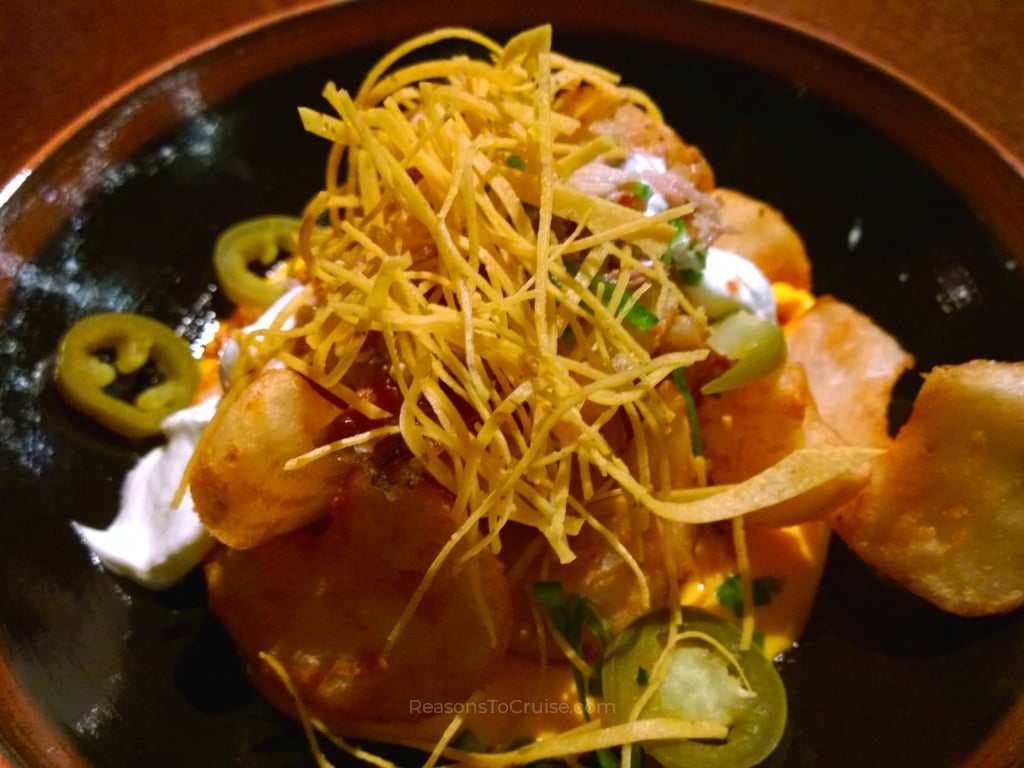 I expected a tiny portion of fries with pulled pork on the top, but Norwegian had other ideas. Large chunks of fried potatoes sat in a pool of melted cheddar cheese, smothered with deliciously-tender pulled pork, spring onions, tomato salsa, slices of fiery jalapeño peppers, crispy shredded tortilla, and a dollop of soothing sour cream. It was heaven on a plate. Fried food is always a winner, but the various toppings were carefully added to add balance, flavour, and texture.

I could have called it a night and left a very happy man. But I craved more.

Had I skipped the starter, I probably would have opted for the 'Pitmaster Platter'. At $24.99 (≈ £21), it's the priciest option on the menu but is the best for trying a bit of everything, with ¼lb (113 grams) each of brisket, pork spare rib, jalapeño and cheese sausage, and smoked chicken, together with a range of sides.

Instead, I opted for the smoked beef brisket, foolishly expecting another small-ish plate.

No sooner than I'd polished off my fries, the plate was whipped away and a tray of smokey goodness slid in its place. 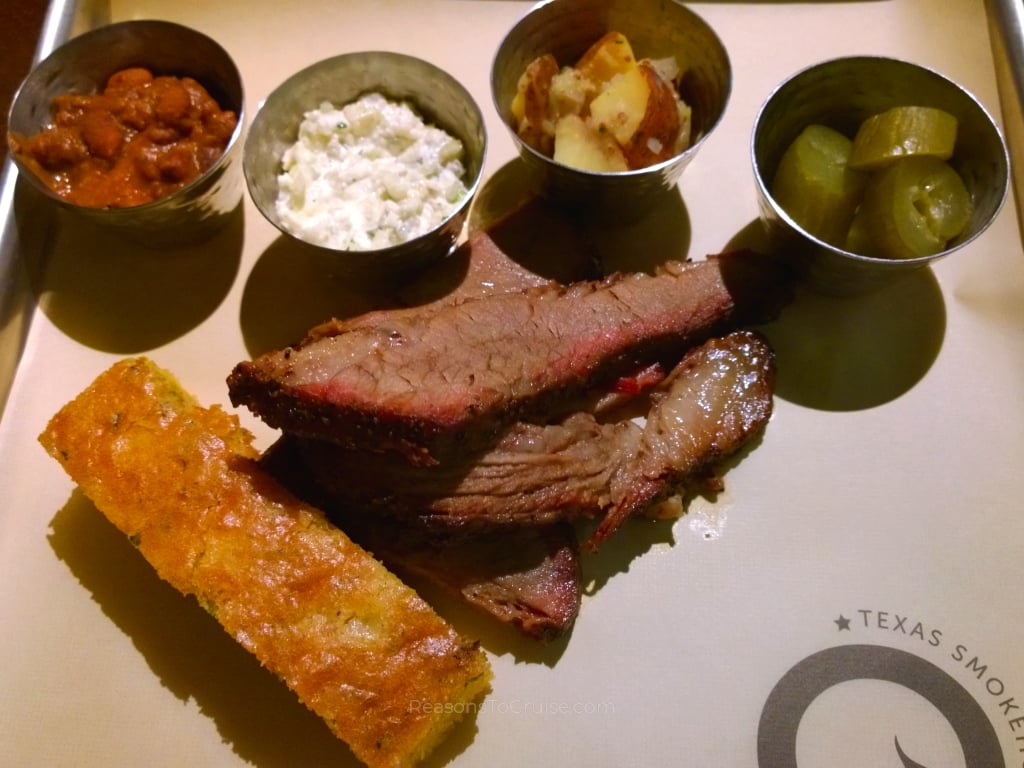 A tray of smoked beef brisket with a range of sides

Four generous slabs of beef brisket sat next to a generous helping of jalapeño cheese corn bread. Four mini-buckets of sides - barbecue beans, coleslaw, chunky potato salad, and gherkins - helped to balance the tray. I'm so glad I didn't order extra sides, even though the mac 'n cheese sounded delicious - one to save for next time!

A quartet of sauces sit on each table, of which you can help yourself. Whether you are a fan of smokiness or spiciness, there's a sauce for you. Alternatively, do as I did and pour yourself a dollop of each sauce.

The melt-in-your-mouth brisket was juicy and tender, with a smokey flavour (obviously). I'm not a big lover of corn bread (I think it's a texture thing rather than an issue with flavour) but the sides were a great accompaniment to the brisket. The beans and coleslaw are my top picks.

After a bout of meat sweats, I gave in, only to be presented with the dessert menu. I really didn't need anything else but there was too much temptation - banana pudding, peach cobbler, pecan pie, sweet potato pie, bread pudding, or warm chocolate brownies.

As a chocolate lover, the brownies caught my eye but I had something similar at Cagney's. So I went for a traditional pecan pie. 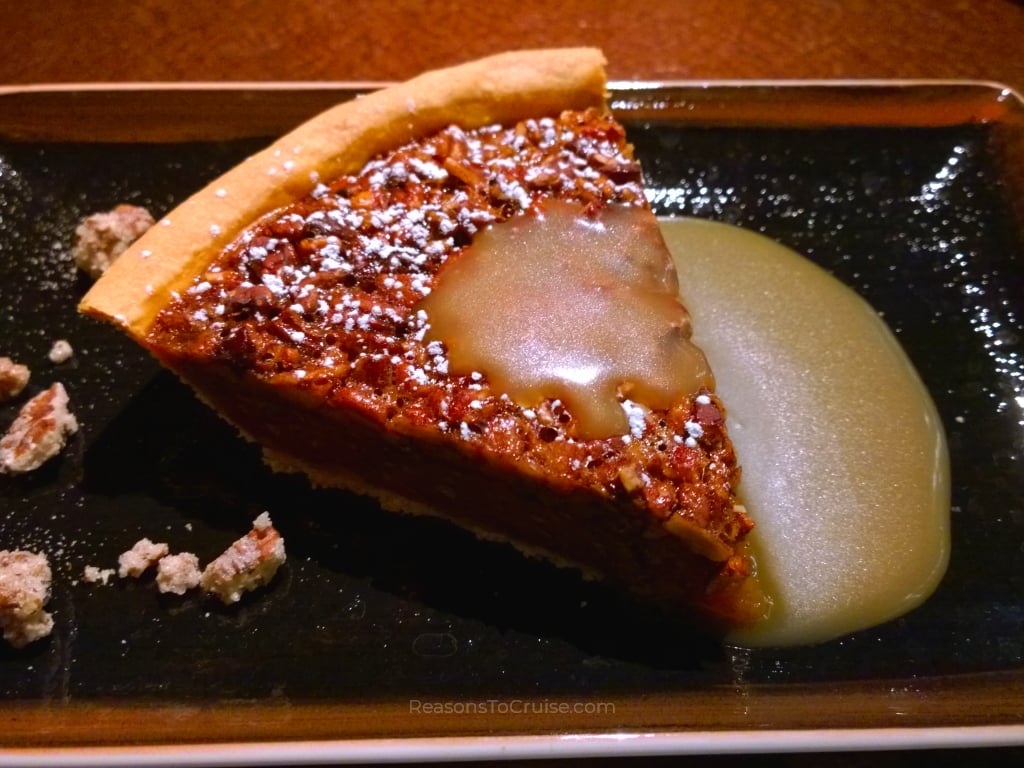 A generous helping of pecan pie with a whiskey sauce

The generous portions continued through to dessert - my photo doesn't show scale well. The slice was massive. As in enough for two people. As you might expect, a pie like this is heavy on the sugar so the whiskey sauce helps to tone that down a bit. Oh, and those caramelised pecans are to die for - I could have snacked on a bowl full of those over coffee.

Speaking of which, after dinner coffee isn't your normal tiny cup here. Only a mug will do here.

As they say, 'everything is bigger in Texas' and a Q, they certainly don't skimp on portion sizes.

My only criticism is that I would have liked to see more theatre in the venue, even if it was just for show. Hunks of sizzling meat sitting atop a big fire pit in a public area of a cruise ship isn't perhaps the safest idea, but seeing something in that vein would have helped to connect the cooking process to the food. A front-of-house preparation area similar to the one at Cagney's would have been a great addition, even if it were mostly for show.

Is it worth visiting?

My three-course meal at Q Texas Smokehouse would have normally set me back around $30 (≈ £25) including the 20% service charge but excluding drinks.

Based on my experience, I'd say this was exceptional value for money.

I loved the décor and hospitality, but above all the food is outrageously good. For a slice of Texas and Southern hospitality out at sea, a reservation at Q Texas Smokehouse is a must.

Not a fan of deafening music?

At around 9pm, a band took to the stage, replacing the gentle background music with deafening country-style music. I like the concept, just not the volume. If you're a fan of loud live music and actively want to avoid having a conversation with your friends or family, choose to dine after this time. If you'd like to hear yourself think, dine as early as you can.

What do you think of Q Texas Smokehouse on Norwegian Bliss? Would you choose to dine here? Let me know in the comments below.

Disclosure: Norwegian Cruise Line kindly supplied an all-inclusive mini cruise from Bremerhaven to Southampton, while I paid for travel to and from the ports. All opinions are my own.