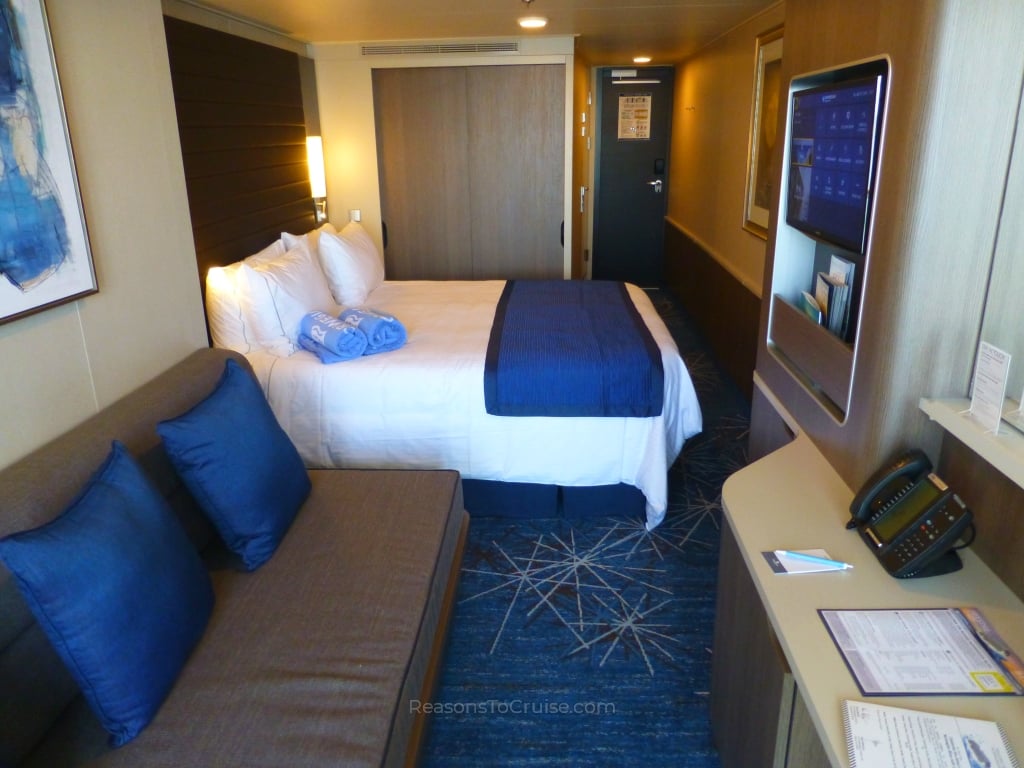 The first person to sleep in mini suite 13202 on Norwegian Bliss was yours truly. And there's something oddly special about having that claim to fame.

I was really looking forward to seeing this cabin as a few years ago, I stayed in a Spa Mini Suite on Norwegian Escape, and I was curious to see a) how things had evolved; and b) whether there was much of a difference between a standard mini suite and a spa mini suite.

First impression as it feels just as compact as my Spa Mini Suite did previously. According to the Norwegian Escape and Norwegian Bliss deck plans, 0.2 square metres (2 square foot) of space in the cabin has been shaved off each the cabin and the balcony. In reality, that isn't noticeable.

The facilities of the cabin are broadly the same as before. Twin lower beds convert to a queen, and there's a sofa that can become a bed if needs be. There's also a wardrobe, desk space, and roomy bathroom equipped with a multi-nozzle shower and trough sink.

A schematic of the cabin can be seen below:

Stylish illuminated door numbers located outside each cabin included small lights to indicate that you are inside the cabin.  Slide your Freestyle Card into the slot next to the doorway to activate the electrics in the room, and the 'occupied' light on the door sign lights up. You can also signify not to be disturbed, and you can request the room be made up. 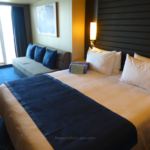 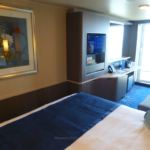 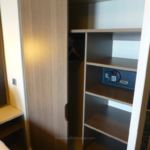 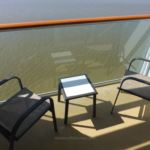 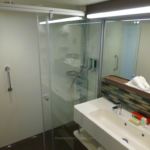 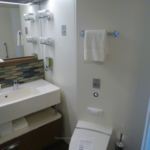 Is the spa mini suite a worthwhile upgrade?

Unlike the Spa mini suite, the standard mini suite has no complimentary access to the Thermal Suite, no Bvlgari toiletries, and the cabin location may not as be as favourable to the Mandara Spa as possible. But pretty much everything else in the cabin is the same.

Thermal suite passes are sold at the discretion of the Spa and on other ships generally retail somewhere in the region of $200 (≈ £162) for a week.

Bvlgari toiletries are like gold dust - they seem to be exclusively available to the tourism trade rather than end customers (I've looked as I love the toiletries - there's a second hand market on eBay but that's about it). Instead, you could always bring some fancy toiletries from home.

And as for easy access, any cabins near the aft stairwell on any deck are just a short elevator ride away from the spa.

So is it worth the upgrade to a spa mini suite? If you expect to visit the Thermal Suite regularly, want a conveniently located cabin near the spa, and you want high-end toiletries, then yes, the upgrade will likely be worthwhile. However, consider the prices of both the regular and Spa mini suites as the extra amenities might not be worth the price difference to you.

Comparing a cruise to Alaska

To draw a comparison, I picked an itinerary at random. The 15 September 2019 Alaska itinerary sailing from Seattle sails to Juneau, Skagway, and Ketchikan in Alaska plus Victoria in British Columbia, Canada, before heading back to Washington all in the space of seven nights. It sounds great, doesn't it?

Trade Up: If your budget allows I would recommend booking a suite in The Haven which includes access to Norwegian’s ship-within-a-ship space. Suites here start from £4,909 per person on the same itinerary.

Trade Down: The real selling point of a mini suite is the larger bathroom. The next level down is a standard balcony cabin which starts from £1,858 per person on the same itinerary.

Prices are based on two sharing a cabin and are available at the time of writing.

Would you book a Mini Suite rather than a standard balcony cabin or a suite in The Haven? Let me know in the comments below.

Disclosure: Norwegian Cruise Line kindly supplied an all-inclusive mini cruise from Bremerhaven to Southampton, while I paid for travel to and from the ports. All opinions are my own.

The footprint of the Mini Suite in Norwegian Bliss compares to a standard balcony cabin on many other cruise lines. A large bathroom and balcony are the perks of booking this grade of cabin.